Discover the D-Day Landing of Normandy 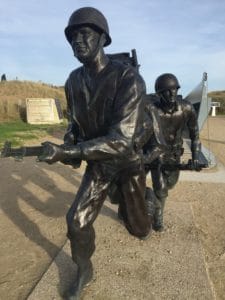 Our tours can be adapted to your stay, choose your program for half a day. Normandy Discovery Tours invites you to discover the battles that led to the liberation of France’s first cities.

HALF – DAY – FOLLOWING IN THE FOOTSTEPS OF THE MEN OF UTAH BEACH :

Utah Beach, added 6 months before the landing to the plan of Operation Overlord, is one of the five landing beaches (western end – American sector) but the only beach located in the department of La Manche.
The visit of Sainte Mère Eglise, Utah Beach, Carentan, will allow you to discover the beginnings of Operation Overlord. Along this route, you will discover the history of the paratroopers of Sainte Mère Eglise (in particularly that of John Steele, the famous paratrooper of the film “The longest day”), the successful landing at Utah Beach, the remains of the Atlantic Wall. We will present you how the Allies managed to conquer this fine sandy beach on June 6, 1944. You will also discover the journey of the 101st Airborne soldiers during the liberation of Carentan on June 12, 1944 (known as the “Band of Brothers” episode).

HALF – DAY – FOLLOWING IN THE FOOTSTEPS OF OMAHA MEN:

Through a second route, we propose you to follow in the footsteps of the men of Omaha Beach, nicknamed “Bloody Omaha”. (famous beach from the movie “Saving Private Ryan”). It was at 6:30 am on June 6, 1944, that the men of the 1st and 29th Infantry Divisions set foot on this Normandy beach. A few kilometres away, the Pointe-du-Hoc battery was also attacked by Allied forces. Finally, this half-day discovery will conclude with a visit to the American Cemetery in Colleville-sur-Mer. Pay tribute to all those men and women who lost their lives for our freedom, and discover their history. Participate in the duty of Memory.

Our team of dedicated local guides will accompany you on a unique sensory experience, filled with moving discoveries, human anecdotes and short stories that have made up the great story. 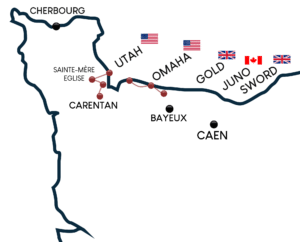 Departure & Arrival : Carentan Station / Bayeux Station
Visit Schedule: 8:30 am – 12:30 pm or 2:00 pm – 6:00 pm
Number of persons : From 1 to 8 people max.
Vehicle : 9-seater vehicle
Language : French or English
Museums : A visit to a museum can be added to your discovery day. Discover our partner museums, here

Program of visits - Morning or Afternoon :

FOLLOWING IN THE FOOTSTEPS OF THE MEN OF UTAH BEACH 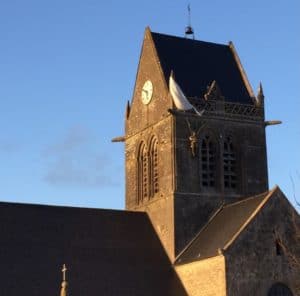 An essential site in the history of the D-Day landings, Sainte-Mère-Eglise is mainly known for its famous parachutist who hung on to the bell tower of the Church. In 1962, this small village of 2500 inhabitants became for a few days, the most realistic setting of the film “The Longest Day”. Do you know how many paratroopers have landed in Church Square? We invite you to discover their history at the very place where the fighting took place in 1944. You will appreciate the charm of this small Norman village which had its importance in the liberation of Europe, it is nevertheless one of the first in France to have been liberated at dawn on June 6, 1944 by the paratroopers of the 82nd Airbone Division.
To know : Possibility to visit the Sainte-Mère-Eglise Museum; Airborne Museum. 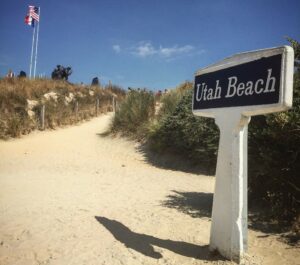 Utah Beach is one of the landing beaches in the American sector. Almost nothing has been destroyed, German blockhouses with beach defences like the anti-tank wall are still present. Now calm and peaceful, this beautiful beach offering a magnificent sunrise every morning will take you back to the past. Utah Beach is much more than a beach, it is a place of memory, a symbol of the D-Day landing. Located in the town of Sainte-Marie-du-Mont, do you know what the inhabitants of the village called this beach before 1944? The time has come for you to discover it.
To know : Possibility to visit the Utah Beach Museum. 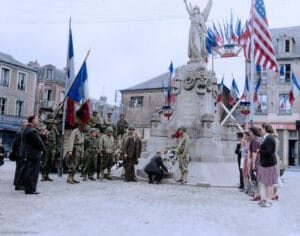 Liberated by paratroopers of the 101st Airborne Division on June 12, 1944, Carentan was the first city of Manche to be liberated by the American troops. Its historic city centre and pleasant harbour make Carentan a charming city today. It was on the République Square that the first official ceremony of the 101st Airborne Division was held in Normandy. Many soldiers of this division were decorated there as a reward for their bravery and heroism during the fighting that liberated the city. During our visit, we will go through the same roads that these soldiers used to take Carentan. Do you know where the “Dead’s Man Corner” is located ? Now transformed into a museum, this place and its history will be to be discovered during our visit to Carentan.
To know : Possibility to visit the D-Day Experience or the Normandy Victory Museum

Do you hesitate between the two options ? Choose the FULL DAY TOUR

FOLLOWING IN THE FOOTSTEPS OF OMAHA MEN

At a height of 100 ft, the Pointe-du-Hoc cliff is one of the most incredible historical sites in Normandy. In 1944, it became one of the objectives of the D-Day landing, and for a reason, the German army had installed an artillery position there in order to reinforce the defences of the Atlantic Wall. This mission is the responsibility of Captain Rudder and his men of the 2nd Ranger Battalion. Before the D-Day assault, a real deluge of fire fell on the German position, the Allies bombed the site several times in order to destroy the German defences, in vain. Today, Pointe-du-Hoc has not changed, bomb holes are everywhere and many are the blockhouses still intact. A must-see, which was honoured by the presence of Presidents Ronald Reagan and Bill Clinton in 1984 and 1994. 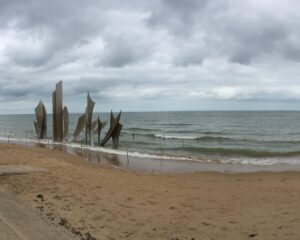 This beach of Normandy, with its tragic destiny, was in the 1920s a small seaside resort renowned for its charming villas on the seafront. During the Second World War, the coast of Normandy was not to escape the construction of the Atlantic Wall and a large part of these villas were to be destroyed and replaced by bunkers and fortifications. Today much more than a beach, Omaha Beach is a symbol of the D-Day landing, because it is on this beach, on June 6, 1944, that many young Americans sacrificed themselves for what they thought was right. 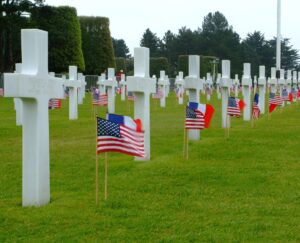 How to describe this place ? The American Cemetery of Colleville-sur-Mer cannot be described. Symbol of what could be called the price of freedom, it is a place of homage and respect. As a guide, we have been through it many times and yet, at each entrance, the same emotion invades us! Through your visit to Normandy, you will do more than discover history, you will participate in your duty to remember.